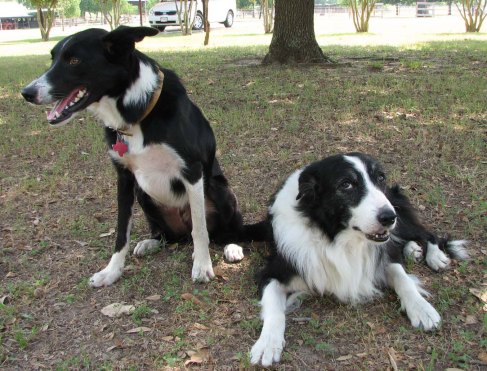 We haven’t been doing much herding practice. It has been just too hot to leave my chair in front of the AC. The dogs have had a stomach upset too. I spent some money I couldn’t afford for medication only to see them with the runs again in a couple of days.

I’ve been making toys for them for entertainment. I bought a really cheap set of muffin tins. (One of the things I always seemed to have around before I moved.) I put a few kibbles in each depression and plopped a ball over it. I’m short of enough balls but I figured it would help them learn the game.

They would rather use their feet to dig out the balls than to remove them by mouth so there’s chaos for a few minutes. At first Doc was more interested in the balls. He’d get one out and go play with it. That was OK too.

It took them several days to learn that there was more food under the balls.

I also took a hard, plastic peanut butter jar and drilled a few holes in it. I put some kibble in it. They had a blast bashing them around to get the food to fall out. Somebody got the lid off of one jar.

Posted in Uncategorized. Bookmark the permalink.

Writer, collie mom and all-around great person.
View all posts by ragtimelil »
← Still Working At It
Next Post →