It has been raining almost every day lately. We haven’t been able to get out to visit the sheep for over a week. Moss has been getting restless. I’ve tried to wear him out with a game of fetch  between thunderstorms  but he needs more than that. 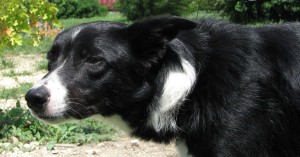 Today we got to get back in the sheep pen. He was really wild, barking at the sheep and diving in. He settled down pretty fast though. L helped me hold the sheep in the center of the pen and he was actually slowing down and wearing a bit. His little bad trick, though, is if he can dash away before anyone can catch the long line, then he dives in.

Overall, we were both pleased with how he was coming along. He went right into his crate when we got home and he’s fast asleep. Even the thunder isn’t waking him up.

Posted in Uncategorized. Bookmark the permalink.